Timing for buying and selling not only Forex but also other trading securities such as stock or commodity is quite similar, which is “buy low sell high" (or sell high then buy low).

Use the chart that already reflect the changes in price movements to predict “buying low” and “selling high”. You can use the chart to forecast trading trend because it can provide a broad analysis.

Predicting when to buy and sell from the chart

Analyzing and forecasting when to trade using the chart is called “Technical Analysis".

It is the study of market action (movement of the prices) primarily through the use of charts for the purpose of forecasting.

This article will discuss in-depth these 5 types of indicators.

A moving average is a line that measures the average exchange rate over a given period of time and is a measure of market sentiment based on direction of market prices.

Forecasting the direction of market prices

Sample chart on EUR/USD with a 4-hour time frame

The orange line in the chart above is the moving average.(colors can change)

In the example above, we see an orange moving average line going up midway.

This shows that the price tends to increase and you can make a big profit by placing a “Buy" order.

Conversely, if the market price falls, the probability of making a profit tends to be high if placing a"Sell" order.

Forecast trading at the intersection point between moving average lines

The red circled area in the sample chart above is the golden cross. Looking at the chart, we know the blue line rises above the orange line and they intersect.

At dead cross, the blue circled area, the blue line goes below the orange line and they intersect.

The cycle of the moving average is not specified, but in trading it is usually associated with cycles as above.

The Bollinger Bands are indicators that apply statistical measure to the moving average, forecasting the transaction from the probability of fluctuations between the upper and lower bands.

About Probability of a Bollinger Bands

As shown in the chart above, the probability of having an exchange rate fall within ± 1σ, ± 2σ, ± 3σ is is determined at each deviation . Predicting the transaction would be based on this probability.

Forecast trading based on probability 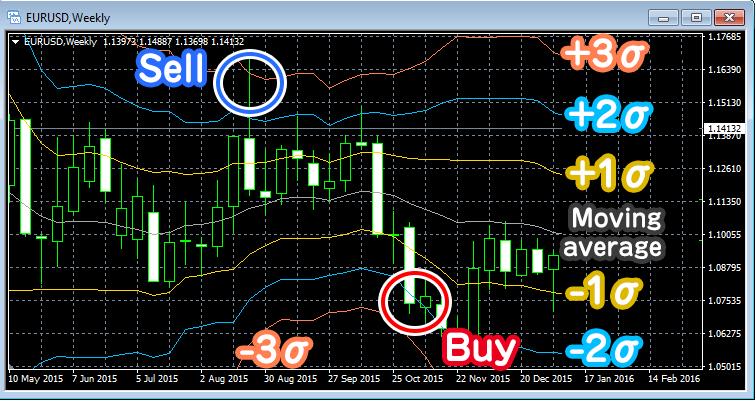 Example for buying and selling point of Bollinger Bands

Box market (Range market) is a market whose prices fluctuate within a certain range.

As the price falls out of the box market and the Bollinger Bands expands, you can predict the trading in the direction of volatility/span>. 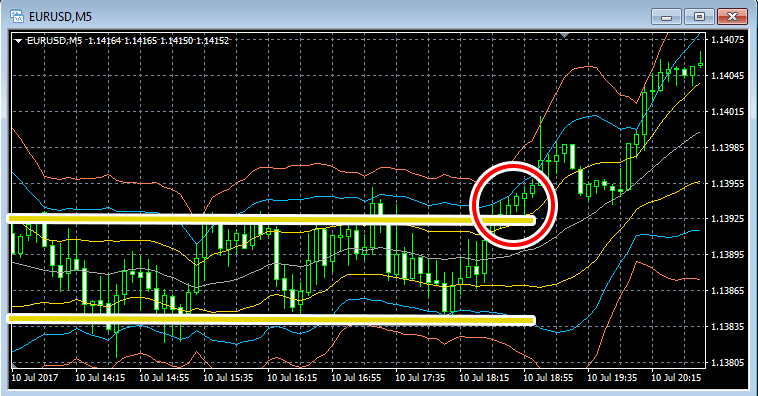 In the chart above, price rises above box market and Bollinger Bands is expanding.

You can make a profit by placing a buy order at the red circled area.

Envelope is a line deviating within a certain range above and below the moving average line.

At the box market (envelope market) the envelope can be taken advantage of because the price changes within certain ranges from the moving average. 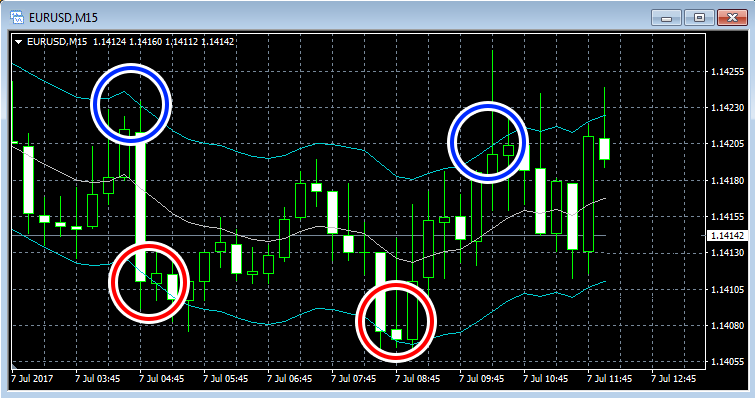 Envelope can be effectively applied in the box market where the price fluctuates within a certain range, but it is not useful in the market where market volatility moves in a certain direction.

When the box market is broken, it is important to quickly cut loss.

The MACD is the difference between the two moving averages and an indicator to predict if the market price overlaps on the signal line on the chart.

MACD is an indicator analyzing volatility shown in the chart.

Predict price movement by taking 0 as the basis

The MACD is displayed by a line with the value “0". When two moving averages overlap, the MACD histogram reaches 0. 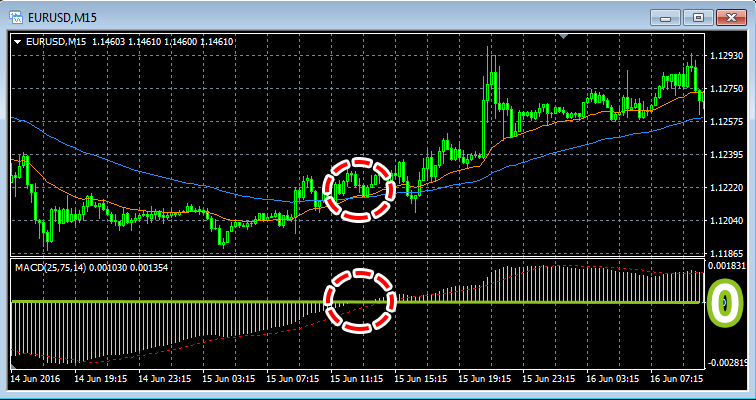 2 moving averages (shown above) and MACD (shown below).

Look at the chart above you will understand that the MACD will become zero at the red circled point where the two moving averages 25EMA (orange) and 75EMA (blue) intersect.

25 EMA will become the golden cross when it rises above the 75 EMA. MACD also changes from negative to positive.

The MACD red line is called a signal because the moving average is overlapping on the MACD.

Taking 0 as a value base, can you predict a trade if the MACD changes to positive or negative value?

The timing of the intersection between the MACD and the signal line is considered as a factor to predict trading.

The prediction that is combined with the zero-based transaction prediction like this is commonly used.

RSI is a technical indicator to decide overbought and oversold.

In the magnitude of price movements at a certain time period (commonly 14), the RSI measures price increase or decrease between 0% and 100%.

RSI is an oscillator indicator shown in the graph. 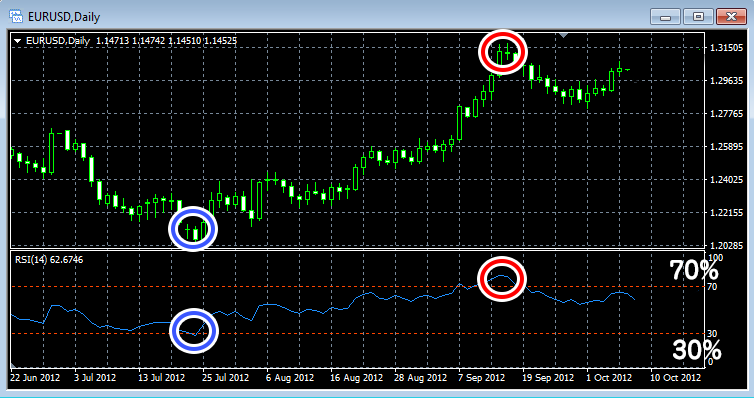 Example of RSI (shown in the chart)

The trading method based on increased or decreased deviation can be used effectively in the box market, but the disadvantage of it is that it is difficult to predict market volatility in one direction.

Therefore, RSI is an indicator that is often used together with other indicators.

As mentioned above, the list of indicators above is often used by investors around the world, but more importantly you need to use the right indicators with current market prices or currency pairs.

Daily exchange rates will vary, so use appropriate indicators to predict market trends at a specified period of time 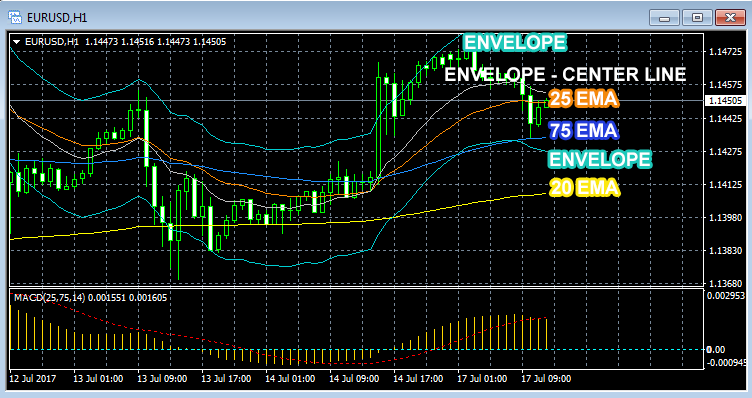 When multiple indicators are shown on a chart, you will easily find the indicator matching with most recent exchange rate fluctuation..

Prices will vary with the moving average and prices are usually in the envelope. Looking at the chart we also see the price increase at the time MACD changes from negative to positive.

Predict the trading trend using indicators that match the market price at that time.

Showing too many indicators on a chart also makes it difficult to predict a trade, so if you want to display more than one indicator, only four types of indicators should be displayed.

For beginners, there is often a tendency to display a lot of complex indicators, but for professional traders around the world, they often use a few simple indicators.

First, it’s a good idea to try trading with indicators from a demo account and practice to find the index that works for you. 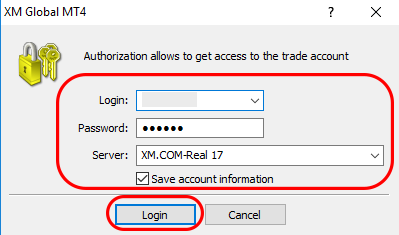 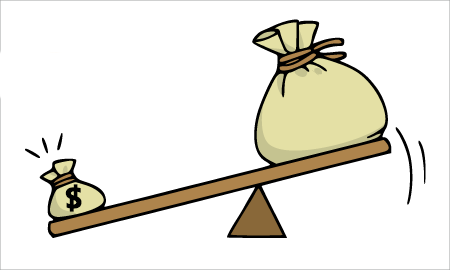 How to customize the chart display in MT ...

How to display the chart in MT4

How to plot Relative Strength index (RSI) on MT4

Here is how to plot Relative Strength in ...